(This is an excerpt from Part IV-Currency Ecosystems)

Interest is a common principle for anyone who has used a bank. It is a fee charged by the owner for the use of money. When we deposit money into a bank, we are the owner of that money. (Though governments have decided that they would rather that you are no longer the owner of the money, but are an “unsecured shareholder” of the assets of the bank). The bank uses the money which you have lent to it, and pays you a fee for that use. That fee is interest.

If you borrow money from the bank, now you have to pay the bank to use the bank’s money. Even though the bank created it from nothing by just making an entry in your bank account!

This chart from Germany shows that those who don’t have as much money always pay interest to those who do have more money.  It shows ten different groups of households with 3.8 million people in each group, arranged by income.  The gold bars are how much they pay out in interest and bank fees.  The grey bars show how much interest they receive from their assets.  The 90%ile group is about balanced in interest paid and received.  But the bottom 80% pay out more interest than they receive, usually much more, and the top 10% receives much more interest than it pays out.

That is the way interest works.  It concentrates wealth into the hands of the wealthy.  Always. 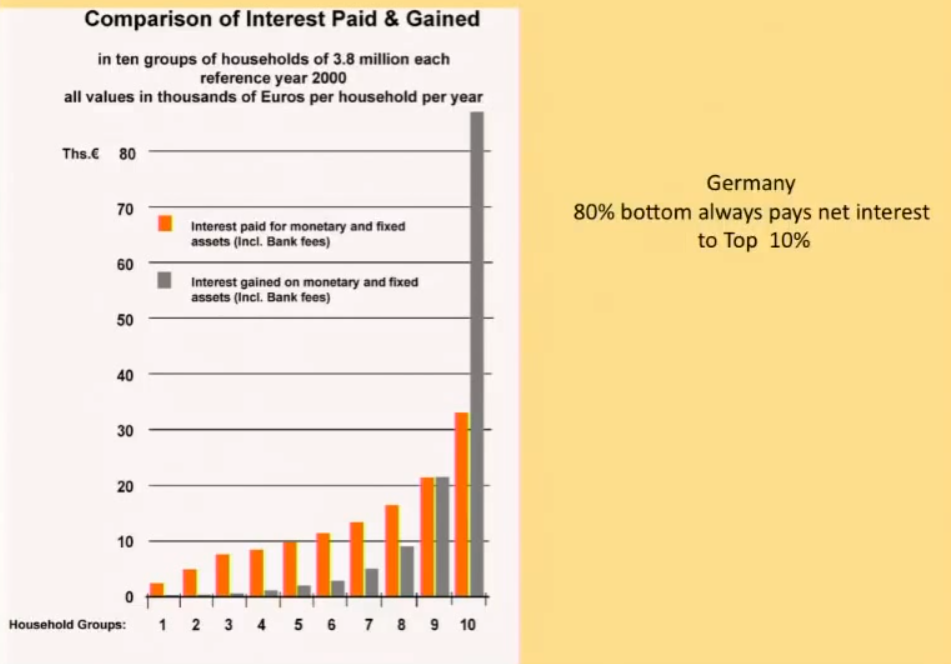 This appears to be the reason for which interest is illegal in the holy books of the Jewish, Christian, and Moslem faiths: interest is basically unfair. It takes money from those who do not have much, and gives it to those who already have it. As a result, interest is like a tax which migrates towards banks and rich people. It is one way that the Yang-type scarce or “hard money” of all nations constantly flows towards the pockets of those who have more of it. It ALWAYS has this tendency.

Another problem with interest is that when the banks create money out of thin air by simply putting the digits for a loan into your account, they never create the interest they charge for the money! So to pay interest, the borrowers have to pay out of their principle that was created for some other use. This reduces the money in the community and sends it to the rich. Interest sucks money from the community to pay banks and wealthy people.

Imagine borrowing for a mortgage for a $100,000 house. The bank makes $100,000 for you (by merely putting that number in your bank account), but they do not make the money for the interest! And over 20 years, you have to pay back $200,000. Where does the extra $100,000 come from? It doesn’t exist! It was never made! To pay that interest money to the bank, you have to extract it from the economy by working harder and harder. So, the economy MUST keep expanding in order to keep functioning. There is no such thing as economic sustainability in an interest economy.

Another characteristic of interest is that it encourages people to hoard money. They have a special word for it, “savings”, but it means that you are not spending that money, you are not circulating it around your community to benefit your neighbors, you are leaving it in the bank to accrue interest. I am sure you are now thinking, “Of course! That is the best way to be! Savings is good!  I was taught that by Mom and Dad and Teacher and Church.” And that is true, from the point of view of an interest society. And these characteristics of interest encourage short-term thinking, as we shall see. 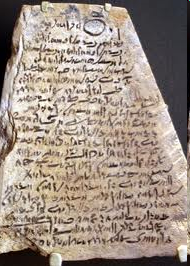 Ostracon similar to that used for receipts by the Egyptians

Ancient Egyptians used a different system. Suppose you had an Egyptian farmer who brought grain to the granary. When he gave wheat to the granary, he received an ostracon receipt for, say, 15 bags of wheat. But when he came back months later to claim his wheat, he only got 14 bags back. One bag was consumed by the rats and spoilage and paying the guards. There was therefore a loss of value associated with the ostracon system. This loss has been called “demurrage”, from the French word for “rust”. Demurrage is basically reverse interest: a fee paid by the owner or user of money to the party who created it.

This idea sounds bizarre to most people who are very comfortable with the idea of interest. But, as we shall see, demurrage can have broad reaching beneficial effects on societies who use it.

Demurrage can be understood by considering the childhood game of “Hot Potato”. A group of children form a circle, and pass around a potato fresh from the oven, or another object to simulate the piping potato. At a predetermined arbitrary time, a bell rings or time is announced. And the child with the “hot potato” loses and is eliminated from the circle.

With demurrage, the usage fee may be assessed on a periodic basis (“when the bell rings”). This fee is what causes the “hot potato” effect, because no one wants to have to pay the usage fee when that time period is up. This encourages circulation of the money, rather than savings.

A study of a currency in Austria during the Great Depression showed that demurrage caused the currency to circulate 14 times as much as the national money! This saved the local economy from the surrounding economic depression for the 13 months that the central bank allowed it to continue. Please read about the Woergl, if you have not yet done so. 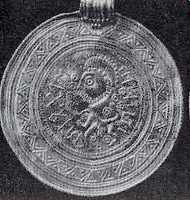 In the High Middle Ages, (9th thru 12th centuries) the common money used by the people were thin wafers of silver called bracteaten. Because these coins were so thin, they were easily damaged. And, they could have pieces broken off to pay smaller amounts.

Every few years the coins were collected, and the nobles reminted them, but for every 4 bractea collected, the users might receive only 3 in return. This was a means for the duke or Prince to make money from the people for the use of his currency. It was in effect a fee for using the money he issued.

This was equivalent to a tax of 25% over those years, or about 0.35% per month. This fee did not adversely affect the economy. In fact as we shall see, the people using this money were more wealthy than any other culture for hundreds of years before or after that society.

In a Yang money system, the people are taught to SAVE MONEY for a rainy day. This is scarcity mentality, caused by the absence of the Great Mother archetype being active in our society. But, we assume it is the only way to think!

We have seen that because interest is charged, but not created, interest pulls value out of the economy of a society and sends it to the rich. But due to long-term thinking and the increased circulation of “hot potato” demurrage money, in a society using Yin-type money with demurrage, every transaction benefits the community, as well as the individual. Yin money also reinforces relationships, so it strengthens the community. Yin-type money with demurrage reinforces investment into long-term investments, investments into production capabilities and systems, instead of merely hording wealth.

In a yin money economy, it does not make sense to save in the form of currency. Instead, savings occurs in the form of tangible, productive goods, which last a long time.

For example, in the Royal Monastery of St. Denis, for the years 1229-1280, every year a significant part of the mills, ovens, wine-presses and other heavy equipment are improved upon or even completely rebuilt. At least 10% of gross revenue (not profits) was reinvested into equipment maintenance. 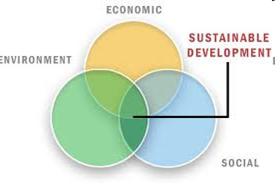 As long as all major corporate decisions are made with a short-term horizon , long term sustainability is going to be an illusion 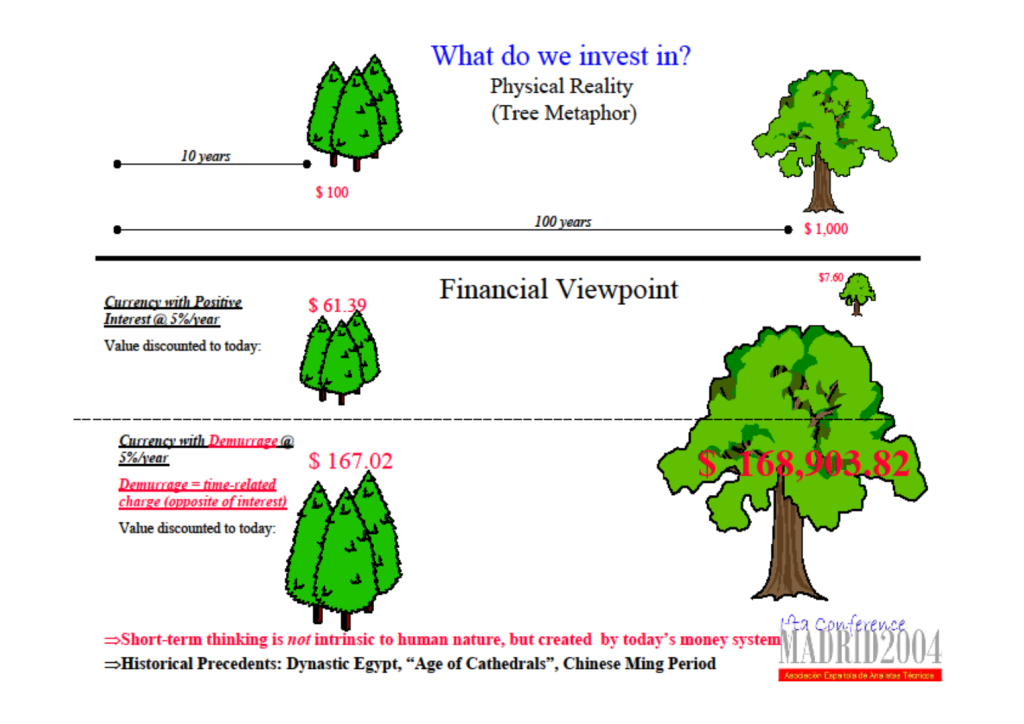 What do we invest in?

Notice that the value of $100 in 10 years is equivalent to $1000 in 100 years. In our society, there is not much thought about this kind of decision, because our money system teaches us to go for the short term goal.

As we have seen, interest extracts payment from the economy, taking away from the wealth of the community. Interest charged on our money means that the community ends up with less value.

If we assume a moderate interest rate of 5% per year, then paying for interest shrinks the value of our small trees down to $61.39 in 10 years. The balance was sucked out of the economy to pay the banks and the rich. And over 100 years, interest charges eats up all but $7.60 from our valuable big tree!!

Demurrage reduces discount rates, and thus increases the present value of a long-term investment. A system with demurrage at 5% per year devalues the currency but concentrates value in durable goods, and productive machinery and systems.

A system with demurrage at 5% per year devalues the currency but concentrates value in goods such as ancient trees and buildings.

The period of Dynastic Egypt and the High Middle Ages in Europe (about the 9th thru 12th centuries) shared some unusual characteristics. These were times of unusual prosperity, for the village as well as the castle. Food was abundant, and varied. Art, and especially love poetry, was prized, and the people had leisure time to devote to the arts. These times had better nutrition, less disease, and taller stature of the population than periods before and after. These were times of unusual power and freedom for women, who were allowed to work in almost any type of labor, to own property, to have legal rights, marriage rights, and education, and even to serve as political community leaders, artisans and troubadours. These are some of the effects of activating the Lover and Great Mother archetypes, or at least not repressing their natural expression. Please see more about these time periods in the Soul of Money.

An unusual shared characteristic of the Egyptian and Medieval timeswas a shared interest in a certain type of religious figure. In 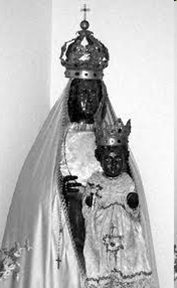 Egypt, it is represented by the image of the goddess Isis with her infant son Horus. In Europe 1000 years later, it was the same image, but this time it was called “The Black Madonna”, and these same statues represented Mary and her son Jesus. These statues were found all over Europe at this time period, and their skin was painted black.

The chair that the Goddess sits upon is called in Greek “Kathedra”, and the buildings built to house these seats are called Cathedrals. But even though a great building was built to house one of these images, she was always kept in the crypt, below ground.

This devotion to the Divine Feminine was a reflection of the activation of the feminine archetypes, especially that of the Great Mother. The Cult of Mary reached its peak in the Central Middle Ages (9th – 12th Century).

In contrast, not a single one was dedicated to Christ–astounding in a religion that is supposed to be all about Him!

Bernard Lietaer asks just what it was which made the builders of the Chartre Cathedral spend all those hours carving details on stones which would never even be visible by the visitors.

He then points out that

the wealth which that town spent in building their cathedral is now still the main source of wealth sustaining the community 1000 years later!

This is a perfect example of the long-term vision which is activated by a society with an active Divine Feminine archetype.