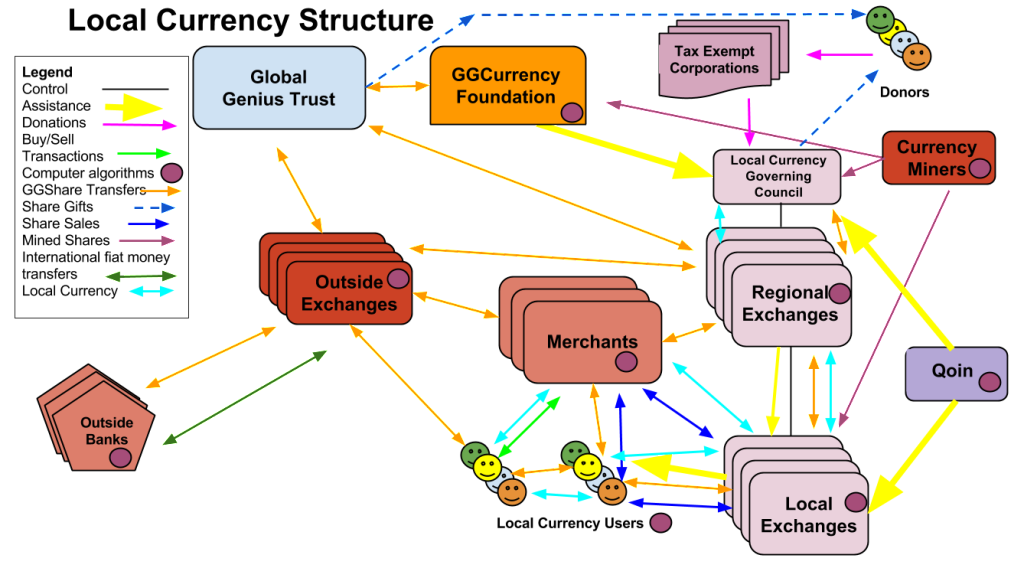 Outside Exchanges:  These are exchanges not a part of the local currency system, and include GEO Foundation’s exchange and the GGTrust Currency Exchange.  GGTrust and the GEO Foundation will encourage other currency exchangers to include E in their basket of currencies.

Computer algorithms: The Ethereum computer protocols which create and use GEO will be open source and available for anyone to use.  They will reside on hundreds or thousands of individual computers, operating as a network.  The algorithms running on computers are represented by a dark magenta dot.  Local users do not need the computer algorithms for using local currency, but do if they are transferring GEO.

Global Genius Trust: The sponsoring organization for GEO and many of the local currencies.  At least one class of GGTrust shares will be available to be used as currency in the GEO system, and interchange with the local currency.

Tax Free Entities:  US Government (and perhaps other government) registered non-profit entities will serve as portals for donor money into the local currency system.  Donors may be able to claim tax deductions for donations to these non-profit entities.  The receiving non-profit entity may choose to pass on  earmarked funds to the Local Currency Foundation.

Donors:  Donors who are not investing to obtain equity shares may obtain US tax credits by donating through a registered 501c3 or 4 tax-free entity.  Donors may receive gifts of GGT shares,  local shares or other gifts as a token of thanks from GGTrust and the local currency system.

Local Currency Users: Exchange currency for goods or service in the local area.  If they need more currency, they can go to Merchants or to the Local Exchange Center.

Local Currency Governing Council coordinates the use and introduction of the local currency and coordinates with local and national governmental authorities to provide community services in exchange for local currency.  They are supported by the GEO Foundation and by Qoin.

Qoin: Qoin.com is a designer and proponent of local complementary currencies.  We will work with Qoin to design a model local currency, and to design variations to meet local needs.  Qoin will provide assistance to the local currency and its various exchanges.

Banks: Banks will interface with local and GEO at local, national and international levels.  Local banks and credit unions may choose to provide integration services for Local Currency members.

GEO Mining: GEO is created by performing complex mathematical calculations.  These calculations are performed by all computers in the GEO network, but some members of the network will chose to provide specialized faster and more powerful computers which are specially designed for these calculations.  They will produce a significantly greater number of GGCurrency than the ordinary user.  Fees levied on mined currencies provide local communities with currencies for system members who provide community labor to earn shares.

Mined GEO: The flow of new mined shares of GEO into the system is represented by dark magenta arrows.  A portion of these new shares is diverted into the local currency for distribution to those performing community service.

Share transfers within the GEO system are represented by orange arrows.  Most of these electronic transfers occur outside of the local currency area, and many of these transfers from or to the local area are handled by the local or regional exchange centers, or by individual members with computers running the Ethereum software.

Share Purchases: Purchases of Local Currency can be accomplished at the Local Exchange or at participating merchants.  Blue arrows.

Share Gifts: GGTrust and the Local Currency Governing Board may choose to donate currency shares in gratitude for donations earmarked to the local currency system.  Blue dashed arrows.