We have been hinting about the ability of different types of money to affect human behavior in different ways.  That’s crazy, right?  How could that possibly work?

Let’s see what a couple of rather strange psychiatrists said about the subject.  One of them you might have heard of–Carl Jung.  A strange bird indeed.  And the other, a psychiatrist who also had a PhD in Human Consciousness, probably stranger still.  But we just might learn something from them which can change our lives, and change our world for the better.

III – How could a money system change human behavior?

Adam Smith assumed in his classic 1776 book The Wealth of Nations that all types of money are value neutral—it didn’t matter what kind of money you used, because they were all the same.  And since he only knew about one type of money, he assumed they were all the same, and they were. But Lietaer says that on the contrary, there are inherent characteristics of each type of money, and these effect and shape the society in which they are used.

And the society is shaped by the influence of different money types on human behavior.

Lietaer uses the Jungian psychology concept of archetypes to explain how money affects the human psyche and human behavior, and through that, affects cultural characteristics.

“That which we do not bring to consciousness appears in our lives as fate.”   CG Jung

So, an archetype is an unconscious structure of the human psyche, which occurs across all cultures.  And which affects human behavior, in similar ways across all of those cultures.

Some archetypes with which you will be familiar are the King, the Queen, the Hero, the Maiden, the Damsel in distress, the Mother, the Lover,and so on. Perhaps you have noticed, or even enjoyed, stepping into one of these roles. The Knight enjoys rescuing the Damsel. The Damsel enjoys being rescued. The Mother is both nurturing and fierce, when need be.   These are patterns which are recognized across all cultures, because they resonate with patterns built into our psyche.

The archetypes which are activated by money are primarily:

More about Archetypes of Money 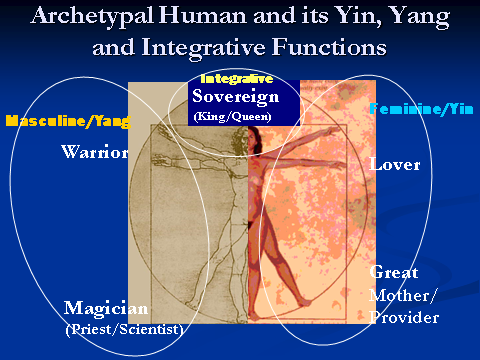 When an archetype is repressed (not allowed to express itself) in the psyche, it causes a phenomenon which Jung called The Shadow. The shadow causes us to unconsciously express that which is hidden within us.

The function of the shadow is to bring repressed issues into consciousness by expressing them through our behavior.

The more we repress something, the more violently it expresses itself in our behavior.

Examples of this might be a sexually repressed priest or nun whose frustrated sexuality bursts forth in uncontrollable sexual or physical abuse of children. It is the repression which caused the uncontrollable expression of the shadow.

Money and the Shadow

Any society’s money system – including our own – is precisely such a way of “translating into visible reality the world within us”, i.e. of projecting on and enforcing in the physical world mostly unconscious archetypal forces.

Common shadows which result from the suppression of balanced femininity in our culture are a fascination with sex and death. These can be appreciated by considering the more and more common theme of sexy vampires and titillating horror films. 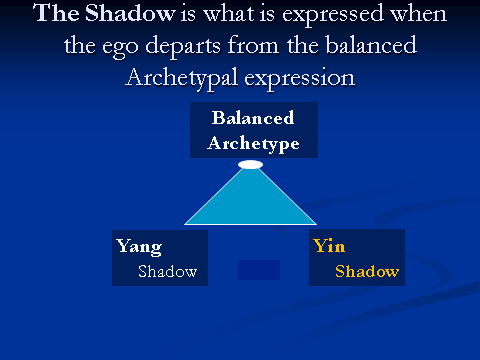 The archetype embodying the Higher Self is the Sovereign; represented by the King for men, or the Queen for women. If, for whatever reason, someone is repressing his or her Higher Self – i.e. the Sovereign within – he or she will tend to behave either as a Tyrant or as a Weakling, the two shadows of the Sovereign.

The Tyrant possesses an excess of a healthy Sovereign’s emotional and behavioral attributes, while the Weakling has a deficit of the same characteristics. There is always a direct relationship of fear between the two shadows of an Archetype. Indeed a Tyrant is primarily afraid of appearing weak, and a Weakling is afraid of appearing tyrannical 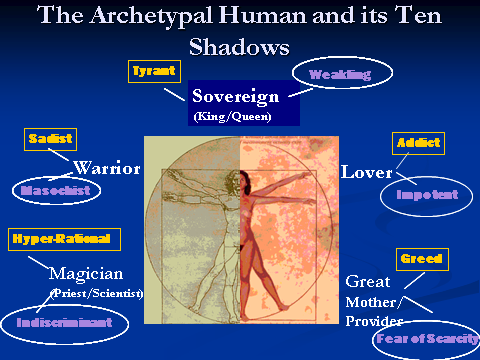 All our money today is Yang Money

Lietaer calls one type of money the Yang type, because it activates the male or yang attributes in humans. The other is the Yin type, which activates feminine or softer behaviors. All of the national money systems in today’s economy, and most of the national and international currencies throughout history, were Yang types, and caused male/excess characteristics in world cultures. A few historical currencies, as well as today’s complementary currencies, are Yin types.

Extracting the “negative” aspects of yang money gives us a list of some of the desirable attributes we are looking for in creating a money system for GGTrust.

When you add the favorable aspects of Yang money to those of Yin money, and you throw in some nifty things from cryptocurrencies and Trade Reference Currencies, as well as some of our own ideas, you can come up with a chart like this:

Today’s national currencies are associated with certain characteristics and effects in human cultures. These effects occur because of the activation of certain characteristics of the archetypes of money. For example, both gold and US Federal Reserve Notes (FRNs) have the tendency to activate the Sovereign archetype, in that they tends to be issued as currency by the authority of the Treasury of the nation. If FRNs were not issued by authority of the US Treasury, no one would use them!

Both Gold and FRNs activate the Warrior archetype to protect them, and to preserve the right of the Sovereign to issue them.

The Magician archetype is activated to create the most complex anti-counterfeiting measures and intricate minting techniques, and to create a system wherein FRN value can be created out of nothing, simply by entering numbers into a field on a computer database. How the ancient kings would have loved to have that technique and power!!!

The shadow of greed develops in some individuals who are generally more active (more Yang energy). Those who are more repressed tend to fall into fear of scarcity as a primary motivating emotion in their lives. Greed and fear of scarcity are the two polar shadows of the Great Mother. Fear of scarcity causes short term thinking, so that governments, corporations and individuals think of short term gains instead of long term benefits.

Scarcity of gold or FRNs causes competition instead of cooperation, hording instead of sharing, individuality instead of community. Competition instead of cooperation can be seen as the opposite of the Lover archetype, which, when it is activated, expresses in cooperation, love, community, unity, and beauty. Focus on Fear of Scarcity puts much more emphasis on survival and utilitarian projects, rather than beauty in the environment. Another characteristic of the Lover has thus been negated. And we haven’t even gotten into the shadow characteristics of addiction and impotence/depression.

Wayne Dyer, author of Your Erroneous Zones and many other books, told this Trustee in about 1991 that the book Power vs Force by David Hawkins, MD was the most important book in the last 10 years. This book was the result of the study of consciousness in a doctoral program by Dr. Hawkins, who was then already a psychiatrist. Dr. Hawkins was one of those people like the Buddha or Eckhart Tolle who suddenly have an experience which leaves themtotally enlightened as to the nature of reality, but totally useless to society.

It took many months for Dr. Hawkins to reintegrate into this world, and then he became incredibly successful at healing people merely by them being in his presence. But now that he understood how the universe worked, even performing miracles bored him.

Dr. Hawkins said that causation as generally understood was a fallacy. There was really no A => B => C type of causes and results. Instead, he described a causal plane which exists perpendicular to our reality, and which contains the causes of events in our lives. Hawkins used the language of chaos theory when he described events in our reality as being the result of “strange attractors” in the causal plane which pulled events and situations together in a manner not apparent to us in this life.

As an example, Hawkins talked about the problems of slums. There are many different causes which have been proposed for slums–we might recognize these probable causes: Poverty, lack of education, poor job opportunities, unemployment, racial discrimination, poor family structure, lack of male role models, poor nutrition, poor parenting skills, poor housing, poor plumbing, poor policing, and poor government interactions. And there have been many programs and experiments to get rid of those causes. Unfortunately, getting rid of the causes has not gotten rid of the slums. New housing quickly becomes damaged. Adding money to the situation fails to help. Community programs have little effect. Why is this?

Hawkins said that there exists in the causal plane (“perpendicular to this reality”, remember) an idea (an “attractor”) which he called “slumness”. Slumness has attracted all the characteristics of slums which we just listed. These are different ideas or concepts or situations which have been attracted to the slumness attractor.

Can you see that archetypes may be exactly the same kind of “attractors” which exist in the causal plane, gathering certain characteristics which are then expressed in this life, in this plane?

So it is with the monetary system and its effect on humans and societies. If archetypes are the attractors of the characteristics they express in our lives, then perhaps we can see how they might influence our lives and our society.

If the world is not as we prefer, then something must be out of balance in society. Whatever that imbalance is, it also must affect the individual. Too much or too little of an archetype, fear which pulls the shadows out of the archetype into our lives and our society, these are the ways in which archetypes get out of balance.

Bringing each archetype into balance in our spiritual/emotional lives is necessary for each of us to live a balanced, harmonious life in a peaceful, harmonious society. And  balancing the 5 archetypes through which money affects the world can be done by balancing any hyperactivity of the active male (Yang) archetypes, raising our vibrations to get rid of fear, which expresses the shadow, and activating the feminine/Yin archetypes.

Activating Yin archetypes can be done by adding complementary currencies with the Yin characteristics we described in Part II.

We will look below at some historical yin money societies and how the yin and yang balance of their money systems affected their societies.

For further development of these principles, view The Soul of Money.

More about the Archetypes of Money