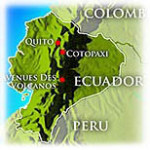 “As far as gold prospecting/mining goes, I have been studying the South American history of it for more than 20 years. I have discovered numerous commercial deposits based on lost, ancient sites. Have you ever read the book, The Rivers Ran East? Yes, the real El Dorado lies in Southern Ecuador and Northern Peru (Sevilla de Oro, Logrono, Old Zamora, Old Valladolid, Borja, Jaen, etc.) There is even evidence that this could have been King Solomon’s source. Old Jesuit records have led me to many great sites. I think you guys are really on the right track.” –Stan Grist

Many historians and gold explorers have speculated that Ecuador is the country which was perhaps the largest producer of gold in history, and perhaps it will be again very soon. In fact Ecuador and Peru were at war for 50 years over who owned the mining sector between both countries. This war ended with the signing of a peace treaty in 1998. After the peace agreement the progress of development of that region has been slow, especially since most people had left the area, and there were almost no roads to speak of. To this day, the roads are still quite poor and very dangerous for the vehicles and passengers (this is why we are also working on a helicopter service company.) There were no supporting equipment companies, power lines, air transport, etc. in the region. Only very few and very brave mining companies have been doing exploration. Some of these companies have spent tens of millions of dollars just on exploration–that is correct, some spent even 10 million dollars just marking where the gold is located, and have not yet extracted one ounce, “but they will…”

In the 30,000 hectare Cumbaratza Mining District, there are 16 companies listed as having mining operations currently underway, with approximately 30,000 miners, though some of these companies have not yet commenced operations.

The first chapter of this book will shed some light on part of the history of the first mining project we are proposing. The story in the book may be classified as mystery/history/occult, but ignore all that and take notice of the lab reports and comments about the amount of gold present (see the letter on page 11): 400 grams per ton!

We rarely talk about these figures because they are so high. We play it extremely conservative when we talk about 2 grams / ton.

Juan Moricz, the subject of this book, was the founder of the company (Cumbaratza) that presently holds the concession rights we plan to invest in. The facts remain that this mine is still available for us, and that to date little has been mined from this large, proven gold reserve.

Plus, do not forget about the other mine in Peru, where we already have the concessions, and which may prove to be even richer than the Cumbaratza mines!