What if one thing about our money changed, and brought us prosperity and abundance?  Would it be worth studying about that just a little?

What if one thing let us keep our money in our community or neighborhood, instead of it all going into the big city, or the government?

Our money system is broken

Dr. Bernard Lietaer is an MIT-trained computer scientist, PhD economist, former central banker, architect of the Euro, successful currency trader, proponent of complementary currencies, past professor of archetypal psychology, past Professor of International Finance at Louvain University, and current Professor of Economics at the Sorbonne University in Paris. His broad experience in the international financial world has given him unique insights into how the monetary system works. He is therefore the developer of many of the ideas used in this project.

According to Dr. Lietaer, these problems are intrinsic to the very type of money system the world is now using. By changing the money system, we can change our societies and our lives.

We offer a proposal for a new currency system which might mitigate some of those problems. We suggest a new, complementary money system to operate alongside, and potentially to largely replace, the current fiat currency system.

Among the most important benefits of this system are:

These points are discussed in the presentation The Soul of Money , which shows HOW the human psyche responds to different money systems, and suggests how to design one to give BALANCE and RESILIENCE.

I recently heard a talk from a woman from Norway who talked about “How can we reclaim our sovereignty and control of our lives?” She has almost totally disconnected from The System. She is off the electrical power grid and heats her home with firewood. She raises her own food and works outside of the government tax system. The only part of the governmental/economic system that she is unable to do without, at this point, is her bank account. This is the only hold that the system has on her, which is preventing her from being totally free. It is time we gave her, and others seeking freedom, another option.

One point to consider: If our monetary system were so good, why would people have spontaneously developed some 4000+ local currency systems to complement the national currency systems? If there were not persistent deficiencies in the current system, why would so many intended solutions emerge?

READ MORE about the GEO Proposal

That Giant Sucking Sound–What If Just One Thing Changed?

There are many different characteristics and effects of the current currency system and its effect on society. (See Yin and Yang currencies below) If we could change just ONE of them somehow, could we make a significant beneficial change in the world? I think that we could.

Our economic system is based on the idea of scarcity—there is not enough.

Our currency is scarce—it is hard to get, originally based on the idea of a scarce metal, gold, which only rich people can hold. And one of the inherent characteristics of gold and scarce money is that it tends to suck up wealth from the local areas and accumulate wealth in the hands of the wealth, including the government. We have taxes that of course go from the farms and the homes to the government. Then there is interest, which is a hidden tax that is sent to city, state and national governments. But think about when you buy groceries at the local shop—where does your money go?   It goes to the big grocery warehouse in the city, doesn’t it? How much of that money stays in your town or neighborhood? Not much! Money for cheese goes to Chicago to pay Kraft. Money for chicken goes to the massive chicken farms of Arkansas. Money for lettuce and tomatoes goes to California, and not to the local farmers in your area! 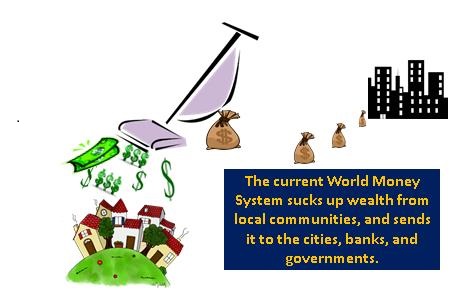 Our whole world economy is set up to suck up the wealth of local places and send it to the pockets and banks of the rich. Think about it. It used to be that colonial powers sent their armies out to subjugate local people, and then their corporations out to gather up the wealth and send it back to the imperial capital. Gold, rum, spices, silk, slaves.

Consider the first big corporation, British East India Corporation, which got a great percentage of the Chinese people hooked on opium to insure a steady supply of Chinese silver flowing into its coffers.

Consider also the Hudson Bay Company (I have been to their store in Toronto), which later changed its name to The Dominion of Canada—still the same corporation, with a different name, still collecting the bounty of the land to send payment to the owners of the corporation.

Today, the governments are the big corporations, and they control the governments. Still, they send out their armies (whether Army, Navy, Marines, Blackwater or faceless mercenaries, just like 300 years ago), and then they establish the Giant Vacuum Cleaners which suck up the wealth of the world, and bring it back home to the banksters and corporate headquarters. Not much has changed in 300 years, has it?

Well, what if we did this differently?

What if we no longer used the idea of scarcity to run our lives?

What if we no longer had to get our tomatoes from California, but we got them from our own neighborhoods? So that the money stayed local? And the local farmers had enough income to invest in greenhouses so that they could provide tomatoes all year around—red, tasty, healthful tomatoes, instead of the mealy, tasteless ones trucked an average of 1500 miles from Florida or California.

What if we stopped buying all our cheese from Kraft, which controls 70% of the US cheese supply, and has left many a destroyed local creamery in its wake? What if instead we bought LOCAL cheese, so that local farmers and cheese makers could earn a good living? What if we decided that we would spend our money, preferentially, on LOCAL produce, crafts, and industry?

Changing the type of money we use, so that it was no longer based on scarcity, could cause our locally spent money to stay in our community. To build our community. To give our neighbors a good return on their labor. And so our local wealth would no longer be sucked out of our communities to pay the colonizers and slave masters, but would stay and circulate and benefit the local economy and people. Is that possible? Well, the city of Curitiba, Brazil grew their economy by 75% by using bus tokens and garbage for money, instead of just the national currency!

Can you get an idea how changing just one thing about our money system might cause a multitude of other changes? Beneficial changes? Behavioral changes? Community changes? We will explore this more below.